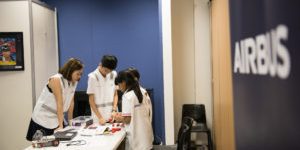 The goal of the initiative by the Airbus Foundation is to encourage students to understand and embrace technology and ignite a passion that could grow into an exciting career in the fields of Science, Technology, Engineering and Mathematics.

The first workshop, which was organised with the Civil Aviation Authority of Singapore, took place between 24 – 25 August at the Aviation Open House at Suntec City. The four-hour workshop introduced students to the process of assembling an A380, from the resources to the logistics, until the manpower needed to do so. The 60 students were tasked to assemble an A380 model, program it with their own algorithm so it is able to manoeuvre on the tarmac, ready for take-off. The students were joined by Mr NG Chee Meng, Minister for Education (Schools) and Second Minister for Transport, who was impressed by the curiosity and motivation of the young students.

The second workshop, which was coordinated with the Singapore Space and Technology Association, took place on 25 August at the ACS Junior Primary School. The 15 students carried out a simulation of a launch mission to space. Over the course, students assembled and launched a rocket, set up a base, established communications, and explored Mars.

Since its launch in 2012, the Airbus Little Engineer programme has successfully positioned itself as an effective vehicle for discovery-based learning, working to enlighten and empower youth in the areas of science and technology through robotics and aerospace. As of now,
the programme has reached over 3,000 students.