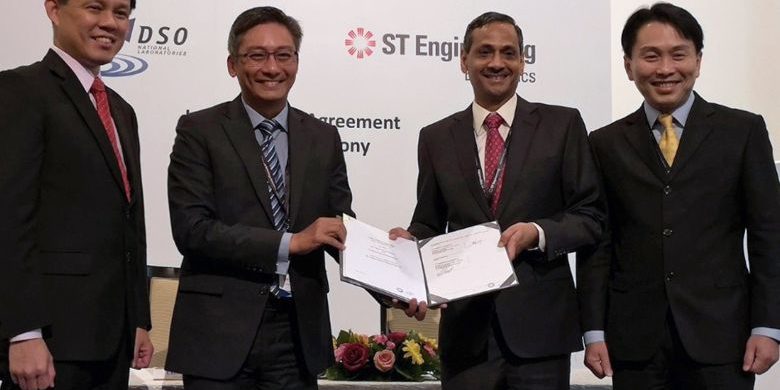 ST Engineering has announced that it is setting up a joint-venture company with DSO National Laboratories to unlock business opportunities with new satellite technology.

Called ST Engineering Geo-Insights, it will package data gleaned from satellite imagery for customers in sectors such as construction, maritime safety and agriculture.

Such new space technologies are an opportunity for Singapore to create new industries, said Minister for Trade and Industry Chan Chun Sing at the Global Space and Technology Convention, where the agreement was signed.

“As a land-constrained country, Singapore’s challenge has always been about how we can transcend our geographical limitations, and space technology allows us to do exactly that,” said Mr Chan at The St Regis Singapore hotel.

“It has a direct impact on the kind of business opportunities and jobs we can create… in the sense of applications in surveillance, telecommunications, encryption and data analytics.”

Typically weighing around 500kg, and up to 10 times cheaper and 20 times faster to build than traditional large models, small satellites are making large volumes of satellite imagery readily available, as they can be launched in bulk for wider coverage areas.

Singapore is not known to be a space-faring nation but we have a lot of other capabilities, like in smart manufacturing… Lower costs allow us to be agile and bring our capabilities to bear on various applications.

MR JONATHAN HUNG, president of the Singapore Space and Technology Association, noting that high costs had been a barrier of entry for potential players in the $476 billion space sector.

ST Engineering previously entered into a joint venture with DSO and the Nanyang Technological University in 2011 to design and produce earth observation satellites.

Mr Tang Kum Chuen, ST Engineering’s president of satellite systems, said: “We are taking the information from the satellites we built under the first venture and fusing it with information on the ground.

“So, for example, we match the data we get against the customer’s blueprint of their construction project and tell them whether construction is progressing as planned or if there has been any deviation.

“This is very useful for mega construction sites, which are nearly impossible to monitor from the ground.”

Another potential use of the satellites, he added, is in maritime safety. Ship movements can be tracked to check for any illegal activities or deviations from maritime traffic rules.

“With the data, we can alert the port authority in advance so that the appropriate action can be taken quickly,” Mr Tang said.

Mr Jonathan Hung, president of the Singapore Space and Technology Association, said that high costs have always been a barrier of entry for potential players in the US$350 billion (S$476 billion) space industry, but low-cost small satellites are a game changer for countries such as Singapore.

“Singapore is not known to be a space-faring nation, but we have a lot of other capabilities, like in smart manufacturing,” he said.

“Lower costs allow us to be agile and bring our capabilities to bear on various applications.”