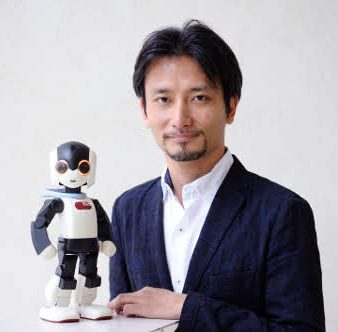 Mr Tomotaka Takahashi is a roboticist and co-founder of ROBO-GARAGE since 2018. Creating a number of humanoid robots entirely by himself, from concept through to production, Takahashi’s designs have been featured in art exhibitions celebrating the creation of Astroboy Time Magazine’s Coolest Inventions of 2004, and promotions for Bandai, Panasonic, and Pepsi. He has also worked with toy companies to produce relatively inexpensive robots for the hobby market, including those for Kyosho.
Mr Takahashi also developed Kirobo, the first robotic companion in space. Kirobo’s capabilities include voice and speech recognition, natural language processing, speech synthesis and telecommunications, as well as facial recognition and video recording. Kirobo was specially designed to navigate zero-gravity environments and assist Commander Koichi Wakata in various experiments on the International Space Station. Its main goal is to see how well robots and humans can interact, hopefully leading the way to robots taking more active roles in assisting astronauts on missions.
Go to Top