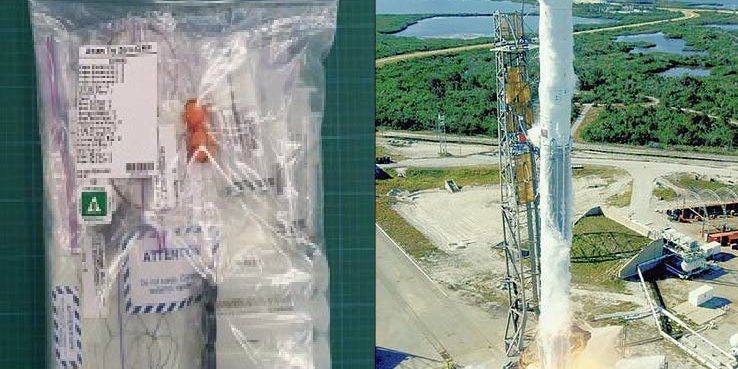 Kibo-ABC member countries decided to prepare unique flight items for Asian Try Zero-G 2018. This required many kinds of activities for flight preparation, which were completed, and launched on Dec. 15th, 2017 and delivered to the ISS on Dec. 16th, 2017.

Flight items are mostly delivered to the ISS with Japanese Konotori, American Cygnus, and American Dragon space vehicles. Each country who prepared flight items–Indonesia, Singapore, and Japan–first sent the items to the Tsukuba Space Center (TKSC) before sending them to the launch site to ISS.

At TKSC, JAXA staff measured the size and weight of each item. All flight items of Asian Try Zero-G 2018 are light, but it is important to have the measurement data for the whole cargo as they can affect the trajectory of the rocket when the cargo is heavy.

Then, JAXA named Operational Nomenclature, so called OpNom, on every item. OpNom is subject to approval and registration by NASA to prevent confusing astronauts, who may encounter many nicknames from hardware providers. Nicknames, especially when abbreviated, may become quite different from what they are. Since there is a large amount of hardware in ISS, identification of each item, tool, and equipment may become difficult and result in operation failure. Therefore, it is important to control the nomenclature.

After that, labels to indicate OpNom were attached to every item. Labels are also subject to NASA approval. This is so they are attached in appropriate places and their contents do not confuse astronauts. All labels of Asian Try Zero-G 2018 have been approved and sent from NASA.

In the meantime, the safety requirements for the flight items were verified. JAXA collected material information from each country and developed a list called Material Identification and Usage List (MIUL). This was intended for cross checking the satisfaction of ISS safety requirements such as flammability, toxicity, off-gassing and others by decomposing each item by its material level. In addition, JAXA identified the existence of hazardous events throughout the experiments and studied the method of hazard controls, then developed a document called Safety Assessment Report (SAR) which was approved by JAXA internal Safety Control Board. Although there were no dangers identified in Asian Try Zero-G 2018, sharp edges were removed to protect astronauts from injury.

There are some flight items which JAXA uniquely modified and arranged to establish an experiment with considering intention of a proposer. One example, proposed by the Philippines was the Double Layered Liquid Ball. The objective of the experiment is to form a double ball using water and oil to check whether the double ball can be formed in zero-G. To form suitably-shaped liquid balls, JAXA made a wire hoop and coated it with water/oil repellent agent. The wire hoop has minimum torsion to prevent capillary action.

Another example is the wood planes of Aircraft Stability, proposed by Singapore. The objective of the experiment is to test the effect of ‘teardrop’ wings, and the effect of changing the neutral point of the aircraft. JAXA had to erase an irrelevant name on the main wings of the wood planes and put some markings so that astronauts can follow the procedure quickly. JAXA also verified how to fly one with the ‘teardrop’ attachment.

On October 23rd, 2017, the flight items were packed at TKSC for delivery to Johnson Space Center (JSC). Arriving at JSC on October 31st ,2017, NASA’s cargo integration team checked every item in the package, label exists, and manifest consistency. The items were then stowed in a soft bag called a Cargo Transfer Bag (CTB) which protects its contents from rocket vibration. This was finally transported to the Kennedy Space Center (KSC) for loading into Dragon 13.

None of the flight items of Asian Try Zero-G 2018 were damaged nor malfunctioned by the launch vibration. However, care was taken not to bend in CTB and packed into a Ziploc bag so that astronauts could find the items easily.

The flight items were launched with Dragon 13 on December 15th, 2017 and docked to ISS on 16th, 2017, and waiting for Astronaut Norishige Kanai to perform the experiments.

Reports on procedure development and astronaut training will be coming soon.