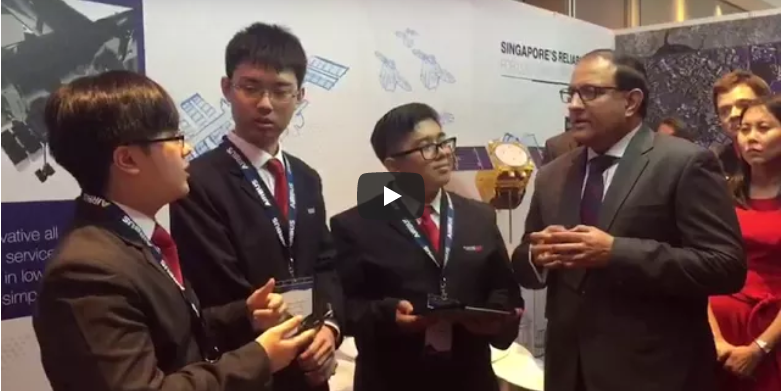 SINGAPORE – Singapore could be one of the first few countries in the world to have small satellites flying in formation.

This allows the satellites to do the same work as a larger one, but cheaper and faster.

This initiative would be the first such effort in Asia, said Minister for Trade and Industry S. Iswaran on Thursday (Feb 1) at the Global Space and Technology Convention.
The plan is a move by the new Satellite Technology and Research Centre (Star), jointly launched by the National University of Singapore and DSO National Laboratories last week.
Mr Iswaran noted the space industry has shifted to small satellites, whose numbers have increased from 20 in 2011 to more than 250 last year (2017).
“Aided by advancements in miniaturisation of electronics and an increase in companies offering space launch services, small satellites promise more comprehensive coverage and flexible usage at a lower cost,” said Mr Iswaran.
He said this opens up new possibilities for businesses, noting that the global space industry is estimated to be worth US$330 billion (S$432 billion).
The new centre’s efforts to fly small satellites in formation requires “high-precision navigation and high-complexity engineering”, said Mr Iswaran.
However, it will build the “deep capabilities” needed to develop advanced satellite applications such as in-orbit servicing.
The Global Space and Technology Convention, now in its tenth year, is organised by the Singapore Space and Technology Association (SSTA) and held at Sheraton Towers.
As part of its efforts to promote cooperation in space technology, SSTA has entered a partnership with India’s Federation of Indian Chambers of Commerce and Industry, and will also sign an agreement with the French Aerospace Industries Association next week.
On Thursday (Feb 01), SSTA signed a memorandum of understanding with the National Trades Union Congress to support the Republic’s burgeoning space sector, such as through encouraging careers in the industry.
It also plans to launch a six-month long accelerator programme for space start-ups here in the second quarter of this year, said SSTA president Jonathan Hung.
There is a need for a “more structured and sustainable accelerator programme to support space start-ups in Asia”, he said.
One start-up that could benefit from the programme is MakerFoundry, comprising Singapore Polytechnic engineering students Julian Kang, Goh Qian Zhe and Pan Ziyue.
The three 18-year-olds won a competition, organised by SSTA and aerospace firm Airbus, on the use of space technology for disaster relief.
The trio – who developed an app that allows people to access satellite networks to report their location after a disaster – see the potential of the space sector to do good.
Said Mr Pan: “That’s where I see us, doing something that benefits society.”
Link to article
Category: NewsBy pixelysgJanuary 26, 2018
Share This Article
Share on FacebookShare on Facebook TweetShare on Twitter Pin itShare on Pinterest Share on LinkedInShare on LinkedIn