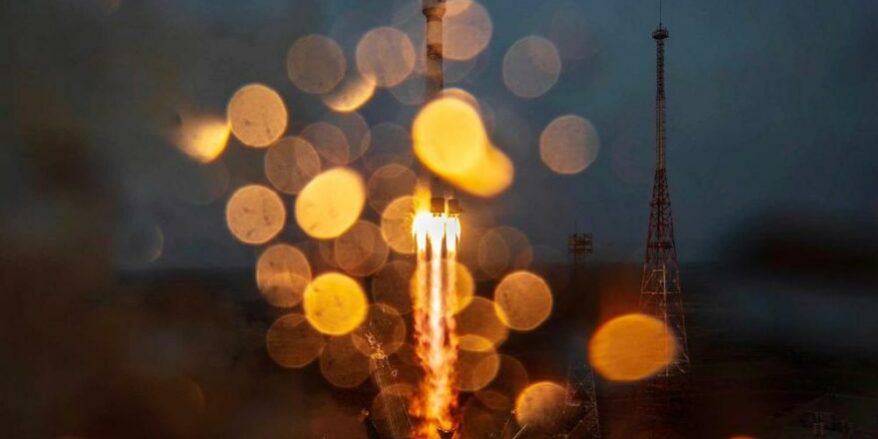 In a YouTube livestream, the kerosene-fueled, three-stage Soyuz-2.1a — painted in blue and white to commemorate the upcoming 60th anniversary of the first human spaceflight — blasted off in the rain from Russia’s Baikonur space center in Kazakhstan at 2:07 a.m. EDT (11:07 a.m. local time). The launch happened two days later than initially scheduled because of a problem detected in the rocket’s upper stage. The livestream showed the rocket soaring into the cloud in seconds and disappearing from the screen.

The 500-kilogram CAS500-1 satellite, the mission’s primary payload, separated from the rocket’s Fregat upper stage around 3:10 a.m EDT, according to a Roscomos news release.

Deployment of the remaining secondary payloads began at 6:13 a.m. and concluded at 6:43 a.m. EDT following two more upper stage burns, according to Roscosmos.

“All spacecraft are deployed! We are awaiting confirmation from customers about establishing contact with the spacecraft. Will get back with the details!” GK Launch Services posted at 8 a.m. EDT on Twitter.

The Korea Aerospace Research Institute (KARI), which developed the mission’s primary passenger CAS500-1, confirmed in a statement the satellite reached its target orbit of between 484 and 508 kilometers above Earth and transmitted its first signals less than two hours after the liftoff.

South Korea’s CAS500-1 — the first of two five 500-kilogram-class Compact Advanced Satellite 500 spacecraft KARI contracted GK Launch Services in 2017 to launch — is designed to operate from a sun-synchronous orbit to monitor farms, forests and water resources with its half-meter- and two-meter-resolution panchromatic and multispectral electro-optical payload.

Among the second group of secondary passengers was Tokyo-based Astroscale’s ELSA-d mission. Short for End-of-Life Services by Astroscale-demonstration, a pair of ELSA-d spacecraft will perform Japan’s first end-to-end test of key technologies for removing space junk from orbit. Astroscale is counting on the ELSA-d mission to accelerate government policies around the world for addressing orbital debris and drive the business case for related in-orbit services.

Also onboard was the first nanosatellite for Sateliot, a Spanish Internet of Things startup that aims to deploy a constellation of such satellites in low Earth orbit to help terrestrial 5G network operators connect “permanently or occasionally uncovered devices” belonging to enterprise customers.

Sateliot recently outlined ambitions to generate €236 million ($282 million) in revenue by 2025 with a constellation of up to 100 satellites, connecting devices for applications ranging from environmental monitoring to logistics.

The startup, which tapped U.K.-based Open Cosmos in 2020 to build and operate its constellation, said it has raised a €5 million series A funding round to support this launch and early research and development. It is planning another funding round to deploy 16 more satellites to launch commercial services by 2022-2023.

Other payloads onboard the launch include small satellites for private ventures Hiber, Kepler Communications and Lacuna Space, plus numerous cubesats for universities and research institutions from around the world.

Sateliot closes a convertible note of one million euros in the framework of its series ‘A’
August 19, 2021