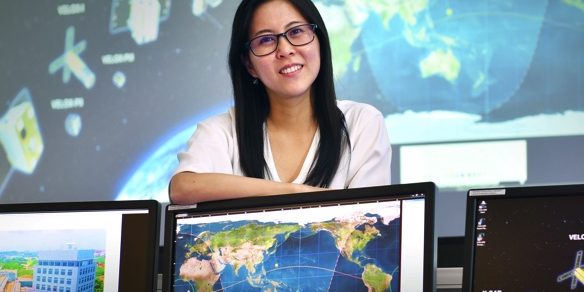 SINGAPORE (Aug 6): When Lynette Tan was growing up, working in the space industry was a crazy proposition — the closest thing would likely have been to look through the telescopes on sale at the Singapore Science Centre. But she went on to found Singapore’s first non-government space association that helped shape the local industry today.
“The Asian space trajectory [now] is very different from the legacy period during the Cold War,” says Tan, executive director of Singapore Space and Technology Association (SSTA). In the 1960s, the space race between the US and what was then the Soviet Union centred on who would get to the moon first. “In Asia, it is very pragmatic,” Tan explains. “Pride is not the main driver. It is about how you can send massive amounts of data through space technology. It is about economic development.”
China has laid out plans to be a superpower in space by 2030, while India has launched more than 200 satellites into space. Commercial entities are also leading a charge into the space industry — thanks to the falling price of satellites. In 2015, about 75% of global space activities involved commercial products and services such as telecommunications, broadcasting and remote monitoring. The industry is expected to grow eight times to US$2.7 trillion ($3.67 trillion) in 30 years, from US$350 billion in 2017, according to the Bank of America Merrill Lynch.
Singapore, too, has the opportunity to compete in this space race. “The bigger countries are focused on the big game, with emphasis on multi-tonne payloads that have massive capabilities. But we have the capabilities in developing microsatellites,” says Tan.
A microsatellite weighs about 200kg, far lighter than a satellite. As it is smaller, it is less costly to build. The constellation formation will also allow it to be more modular. “They can be used for disaster monitoring or to beam internet access to places with no fibre,” Tan says.
The microsatellite industry is still very small, but the number of small satellites launched globally has grown from 20 in 2011 to 250 last year. Singapore also has the perfect use case — its connected-living Smart Nation push. Microsatellites can talk to self-driving cars and monitor foot traffic in a shopping mall, among their myriad applications. “When we talk about Smart Nation, data and the Internet of Things, it is an integration of many platforms and systems, [which requires the use of satellites in space],” she adds.
Tan started SSTA in 2007 with a team of fewer than 10 people. Since then, SSTA has spearheaded dozens of major projects. These included the Singapore Space Challenge and the Global Space & Technology Convention, which brought in experts from SpaceX, Virgin Orbit and Arianespace. SSTA also serves as a bridge between public agencies and the private sector. Tan was formerly the centre director of Asia-Pacific at the Economic Development Board (EDB).
Over the past decade, the industry has blossomed in the city state. There are now at least 40 space tech companies, a third more than 10 years ago. In 2015, ST Engineering Electronics launched the first made-in-Singapore commercial satellite. The TeLEOS-1, which has a mission duration of five years, is equipped with electro-optical cameras to perform imaging for disaster monitoring, urban planning and homeland security purposes. Meanwhile, Nanyang Technological University has launched a number of smaller satellites, including a nano-satellite in 2017. Aoba Velox-III was launched into the orbit from the International Space Station. It will conduct tests on the durability of commercial microprocessors, such as wireless communication systems, in space.
As the space industry here picks up momentum, Tan’s scope has evolved. “We are doing a lot of mentoring with space tech start-ups. We also help bridge funding for them,” she says. SSTA is working with close to 10 start-ups. It mentors and offers business advice to space tech companies, including one that is building a microsatellite constellation. In less than a decade, the lower space orbit may be mostly occupied by commercial companies, say observers. New businesses, such as in-space manufacturer NanoRacks and inflatable space habitat maker Bigelow Aerospace, are already eyeing a piece of the new space real estate.
How would Singapore companies compete? “For us, it is a market issue. Large nations with a huge land mass have a lot of domestic requirements [for satellites]. So, it is very challenging [to just serve the domestic market for Singapore companies]. Without the market appetite, it is more challenging for things to scale up,” says Tan.
The gestation period for space technology is also a lot longer. A nano-satellite can take up to two years to build, and bigger satellites much longer. That means space tech companies need a pool of long-term investors to power their inventions.
And there’s the rub. Available funding for space tech is widely dispersed across multiple organisations such as Enterprise Singapore and the EDB, says Rohit Jha, co-founder and CEO of Transcelestial Technologies, a start-up that wants to use laser technology to transmit data via satellites. Transcelestial plans to launch three satellites by early 2020. “It would be better to consolidate [space efforts] under one agency,” says Rohit. “It should not be like NASA [the National Aeronautics and Space Administration] but [instead should] have a commercial focus that helps companies.”
Is SSTA the one to take charge? On Tan’s part, she is glad her decision to start a non-government organisation is paying off. “[A government organisation, as] a custodian of public funds, has to consider that the taxpayer’s money is well spent. Sometimes, it is very hard to validate [what] is a good use of public funds,” she explains. “That conversation is taken out [because we are focused on commercial goals]. The investors sit with you and if they see a business case, they will go for it.”