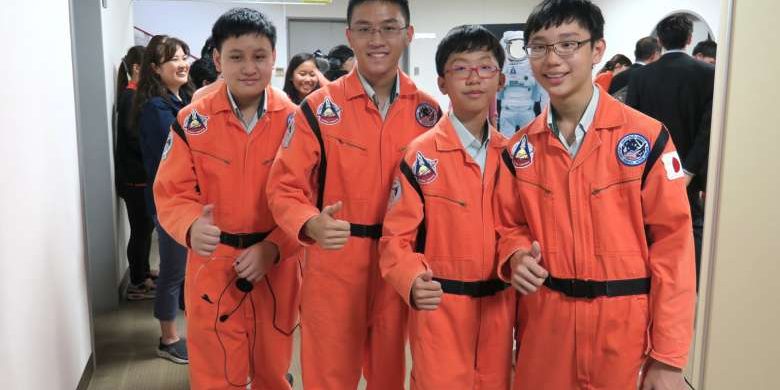 Hillgrove Secondary student Wang Hao Ming, 17, is fascinated with space and, two years ago, he forked out $800 for a telescope.

His schoolmate, Justin Chua, 14, meanwhile, is passionate about aviation – in primary school, he had collected styrofoam model planes.

They came close to living out their dreams last week when they were among four Hillgrove students invited to visit the Japan Aerospace Exploration Agency (Jaxa).

There, the Singapore students donned astronaut jumpsuits while participating in a mock field exercise, and were also given a rare look at the agency’s mission control room.

But the highlight of their trip to the Tsukuba Space Centre, about 70km north-east of Tokyo, was witnessing Japanese astronaut Takuya Onishi conduct an experiment they had designed. Testing the impact of a microgravity environment on the flight of paper planes, the experiment was beamed live from the International Space Station (ISS) under the Try Zero-G for Asia programme.

It is the first time a Singapore proposal has been selected for the programme, which began in 2011.

The programme invites students and youth from the Asia-Pacific to submit proposals, some of which will be conducted by a Japanese astronaut on the ISS, where Japan has a space experiment module called Kibo, or “hope” in Japanese.

There were more than 120 entries this year, and five were chosen.

Mr Onishi, 40, who was launched to the ISS in July, said: “Space is a unique environment. Using this uniqueness, we can do many varieties of experiments on board the station.”

One such experiment is the Flying Paper Plane proposed by the Hillgrove team, which also includes Ethan Tan and Caleb Goh, both 14.

Hao Ming is in Secondary 5, while Justin, Caleb and Ethan are in Secondary 2. The quartet met during aerospace-related co-curricular activities in school, which are part of its Flight and Aerospace Applied Learning Programme that helps students pursue their passion in the area.

The hypothesis by the Hillgrove students was that the way paper planes would fly in a microgravity environment would – like on earth – change depending on the angle of their ailerons, or the outer wing flaps that control the plane’s roll.

One difference is that in space, the paper planes will not stop until they hit an obstacle.

The students also posited that with a rudder,a paper plane will turn left or right following the direction that is set by the rudder.

The experiment results proved to be similar to their hypotheses.

Ethan told The Straits Times that the team’s greatest challenge was coming up with a fresh idea, because “a lot of things already have been done in space”.

Justin said another difficulty was “coming up with the instructions”. This was because “they needed to be very clear and precise, as it will be quite hard for us to communicate with the astronaut when the experiment is going on”.

SSTA president Jonathan Hung said the pact allows opportunities for Singapore to conduct experiments on board the Kibo module. He said: “We can now engage Jaxa at a more technical level and fully execute projects through the Japanese astronaut on board the ISS.

“This means that our own satellites or projects could be flown to the ISS and then tested or ejected out into space.”

One avenue of engagement is through future editions of the Try Zero-G for Asia programme.

“It’s the first time our students have taken what they learnt in the classroom not only into the real world but into space,” he said. “We hope they will take the experience back to school, and become ambassadors of Stem (Science, Technology, Engineering and Mathematics) as well as of the Kibo programme.”

Hao Ming and Caleb said they hope to pursue a career related to space.

Hao Ming, who also enjoys taking pictures of space, added: “I hope Singapore can move to the next level in the space industry, which it currently does not have so much focus on.”